History of the caravan 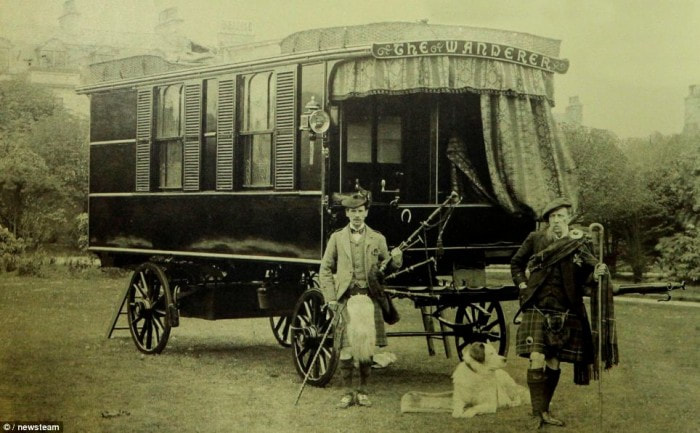 In Europe, the origins of travel trailers and caravanning can be traced back to travelling gypsies and showmen who spent most of their lives in horse drawn caravans.

Samuel White Baker purchased an actual Gypsy caravan in Britain and shipped it to Cyprus for his tour in 1879. The world's first leisure trailer was built by the Bristol Wagon Works in 1880 for Dr. William Gordon Stables, a popular author of teenage adventure fiction, who ordered a "gentleman's caravan". It was an 18-foot (5.5 m) design, based upon their Bible Wagons, used by traveling preachers. Stables named it Wanderer. He travelled around the British countryside in it and later wrote a book documenting his travels in 1885 called The Gentleman Gypsy. This moved the Duke of Newcastle to commission his own caravan, The Bohemian.

By the turn of the century, 'caravanning' for leisure had become an increasingly popular activity. In 1901, the first dedicated caravanning club was established. The Camping and Caravanning Club (originally the Association of Cycle Campers) was founded by Thomas Holding the father of modern camping. The Caravan Club was founded in 1907 with Stables as its vice president. Its stated aim was to "... bring together those interested in van life as a pastime...to improve and supply suitable vans and other appliances...and to arrange camping grounds." 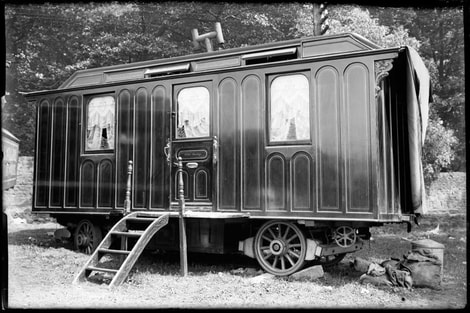 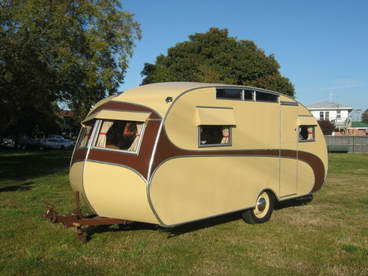 1936 Car Cruiser
One of the oldest and most respected names in British caravanning, Eccles pioneered caravans in Britain and in the 1920s did much to popularise what was then a new form of leisure. The Eccles story began in 1913, when W A J Riley built himself a motor caravan on the chassis of a 1909 Talbot, which in 1919 was displayed at a London garage close to the Motor Show together with a primitive trailer ’van. A favourable response to these prototype ‘homes on wheels’ encouraged the Rileys to venture into the infant ‘motor caravan’ business. The first production run of 50 units from Eccles’ Birmingham factory commenced soon after and by 1921 the firm was exhibiting at the Motor Show itself. The Eccles is recognised as the first conventional single-axle caravan designed to be pulled by a normal car using a tow-bar.
Caravanning slowly grew in popularity as design progressed and more manufacturers appeared on the scene. By the late 1920s the more well-heeled motorist could browse the Eccles Motor Caravans catalogue and select from a variety of trailer ’vans and coachbuilt bodies, the latter adaptable to the chassis of the customer’s choosing. Also illustrated were a number of ‘specials’ that Eccles had built for commercial users. Good publicity for Eccles as well as the enterprises concerned, ‘specials’ were a lucrative business and Eccles was the first manufacturer to undertake this kind of work. As caravanning’s popularity grew, more companies sprang up all over the UK. By the early 1920s, caravan construction consisted of a mixture of panelled sides and canvas. But methods progressed to a framework that was then panelled in plywood – usually marine ply. Lightweight, cheap caravans had spruce framework held together at the joints by panel pins, but put any stress on the framework and those joints came apart. On quality tourers, ash or other hardwood was used for the frame, with half-lapped joints held together with metal braces. These vans also used plywood, but it was panelled with aluminium sheets.Soon hardboard was being used in cheaper single-panel caravans, but in cold weather these tourers were far too chilly to be comfortable, so manufacturers switched to double panels, many with an air space between them for insulation. Cork and other materials were often used to fill this gap. Roofs were usually plywood covered with stretched canvas, which was then given several coats of lead paint. By this time, the chassis had also changed to steel. The framework was built off the chassis, then placed onto it after completion.
During the 1930s, framework was covered with hardboard or aluminium, but tourers needed repainting on a regular basis. With more aerodynamic profiles, however, and the advent of Art Deco, caravan construction was about to step into the future.
Airlite Caravans was formed by Clifford Dawtrey in 1935; by 1937 it was using Bakelite plastics in its tourers. The process was labour-intensive and involved hours to ‘iron’ the plastic on over all edges of the van. If the Bakelite wasn’t applied correctly, though, it cracked, exposing the corners to water and damaging the panels.
From ply to steelAirlite was short-lived, but Clifford Dawtrey created Coventry Steel Caravans and revisited its construction methods. An all-steel model emerged, complete with a sliding sunroof. An ash frame and steel panels were added to the framework. This again was a labour-intensive process, as well as an expensive one, but the results were superb. Named the Phantom Knight, this steel van was strong, aerodynamic and had advanced features, yet it was costly and heavy. Dawtrey built another variant using leathercloth as an external finish, but the company folded in late 1939.

The Second World War disrupted caravan manufacture but it also pushed van makers to look at new building techniques. Some companies borrowed ideas from aircraft manufacture. Eccles developed jigs that built the framework; then the tourer was assembled on a production line. Hardboard was still used, but some manufacturers tried aluminium, which was also tested for roofs, replacing doped canvas.
Other companies developed new ideas. In 1948, Paladin used sections of wall that slotted into place on the chassis. The revived Coventry Steel employed a similar method, but Dawtrey’s ideas of plastics in van construction were being employed in Coventry Knight Caravans from 1947. Moulded Perspex sections in the roof and Perspex windows were used. Some makers tried aluminium frameworks, but this was expensive and added weight. Chalfont Caravans used metal sections based on aircraft manufacture techniques.
During the 1950s, caravans were still being built as they had been in the 1920s and 1930s, with timber frames, double-panel ply sidewalls and a single-panel roof. Early Streamlite Rovers (Sprite) first used Holoplast, a heavy material that proved expensive – and buyers didn’t pay for costly new construction.
Insulation was added to timber frames, plus aluminium was becoming cheaper so hardboard was gradually phased out. However, forward-thinking caravan manufacturers began looking into a promising new material called glass-reinforced plastic (GRP), aka fibreglass.
Not only was GRP more durable, but designers could finally come up with some aerodynamic designs. Willerby Caravans near Hull designed a large van named the Vista. Its fibreglass was seamless and the company boasted that it was ‘leak free’, claiming that GRP was the future of caravan construction. Willerby branded its construction ‘Armour-Plas’ and by 1956 it had spawned the more popular Vogue model.
The Vogue went further, adding a floor moulded from GRP. The chassis was almost dispensed with by using a design that is virtually the same as that found in modern tourers today.
Other makes joined this caravan design revolution. Berkeley Caravans used GRP in a new model named the Delight. Made of two joined halves, the Delight used GRP to its best capabilities. Berkeley named its GRP process ‘Fibreform’, but it proved more successful for its Berkeley Sports car bodies than its vans. Paladin used a GRP mould for the top half of its tourers, leaving the lower panelling in aluminium.
Luxury methodsTop-end maker Freeman Caravans moved to all-GRP constructed caravans in the mid-1950s. However, at this point, GRP was still expensive and heavy. Willerby dropped the GRP method altogether, as did Berkeley which went into liquidation. (It started up again briefly with the GRP Encore, but was short-lived.) Luxury brands Siddall and Cheltenham both opted for GRP but only for the front and rear panels and the roof of their vans.
In the 1950s, Berkeley introduced the Europa, an all-steel model that the company hailed as a caravan of the future. Testing was extensive, but the public didn’t like the profile, price or weight, and many rusted away.
By the 1960s, Carlight had tried out sandwich sidewalls using a GRP exterior with no seams in the sides. This was years ahead of its time, but Carlight customers still preferred the old coachbuilt style, although front and rear panels were now GRP.
In 1964, Regency, a northern company, used GRP again for all panels that were then screwed together in sections. Three years later, the company developed a sandwich construction for floors – at a time when most other manufacturers were still using hardboard or even tongue-and-groove flooring.
The problem with GRPGRP had been mastered in terms of caravan construction, but the moulds needed for it weren’t cheap. It wasn’t until late 1968 that Hull-based Ace Caravans invested heavily into GRP for its 1969 tourer range. Using full-height front and rear panels, this GRP method was designed to give the mid-priced buyer a more reliable van. Ace claimed that leaks would be a thing of the past, while at the same time giving its caravans a modern appearance that competitors couldn’t match. However, GRP panel joints in the aluminium roof proved weak, and within 12 months Ace dropped the idea.
During the 1970s, sandwich-constructed floors were introduced, but in general, construction stayed the same. Silverline Caravans tried using the sandwich method, an idea it had seen in the US, but again, manufacturing problems and expense killed the idea.
Then Eccles, with help from Ogle Design, came up with a new concept that also incorporated extensive plastic construction. Van framework was still made of timber, but the sides were aluminium, and both front and rear panels were made using plastic moulds. The chassis ended at the axle, the floor was supported by wood, and the roof was also made using plastic side moulds. Innovative, for sure – but not a big success.
In 1974 the Ci Group, of which Eccles was part, developed the idea of injecting foam into the sidewalls and ends of caravans. Strong as well as lightweight, it also retained heat – but it cost over a million pounds to put in production, so only the Europa and Eccles models benefitted from the process.